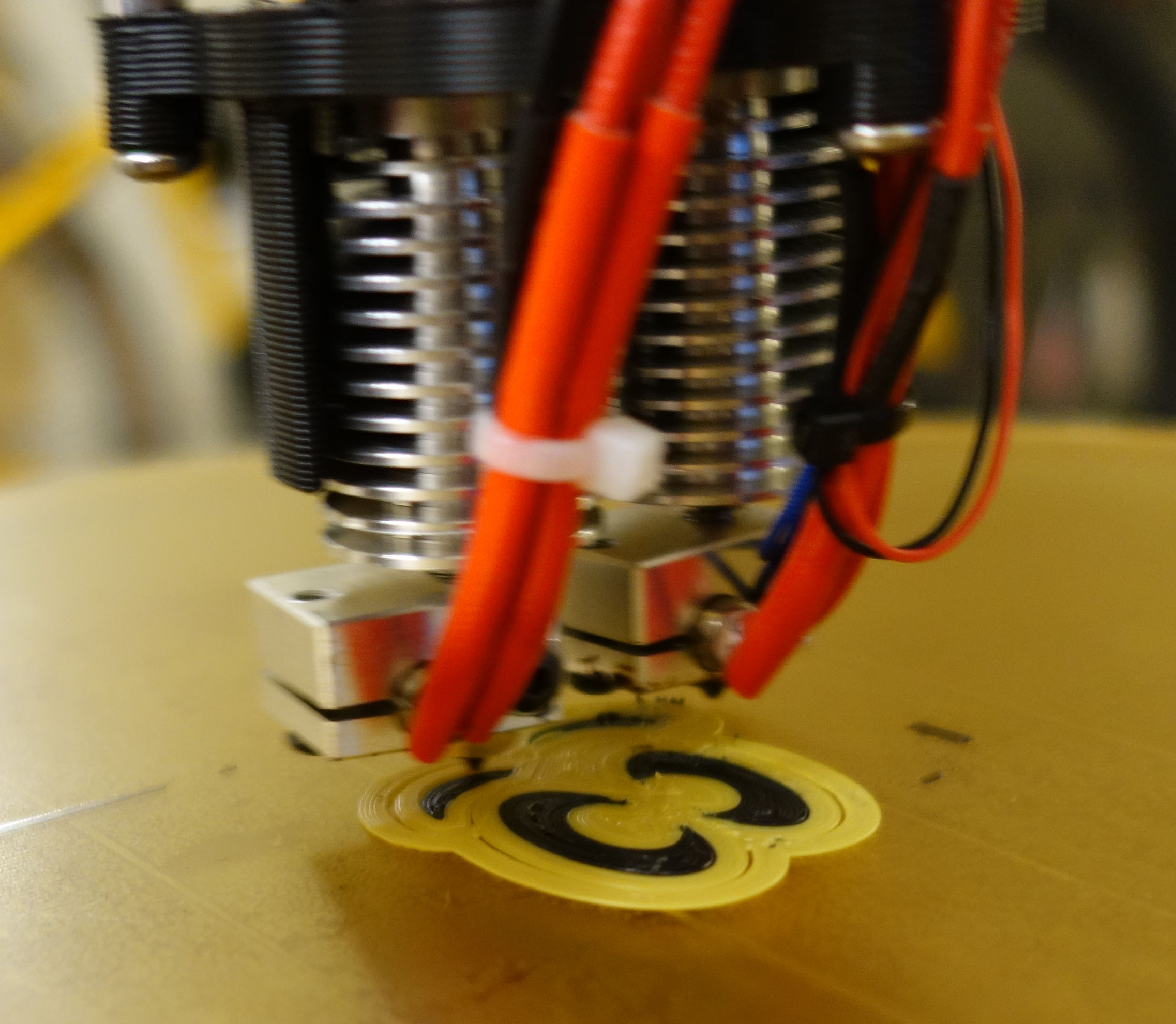 The goal of this project was to implement a dual extrusion modification for a SeeMeCNC Rostock Max V2 delta printer. The secondary goal was to challenge myself to design any new parts from scratch as a learning exercise.

Once built, playing around with options like multicolor or multimaterial printing should be fun!

Although an imposing project to start, I was surprised to get such good mechanical performance from the design. Most of the print challenges in early testing can be attributed to the usual process of tuning software to get the most out of the machine.

There are two major physical components to dual extrusion: the extruder (cold end) holder and the hot end mounts on the printer effector platform.

There are some pre-existing options for mounting an additional extruder. TrickLaser.com sells extruder kits for $45 each. There are a few printable options in existence, like this and this.

With these prior designs in mind, but the goal to give myself some freedom to try original ideas, here’s what I came up with on the first working attempt! 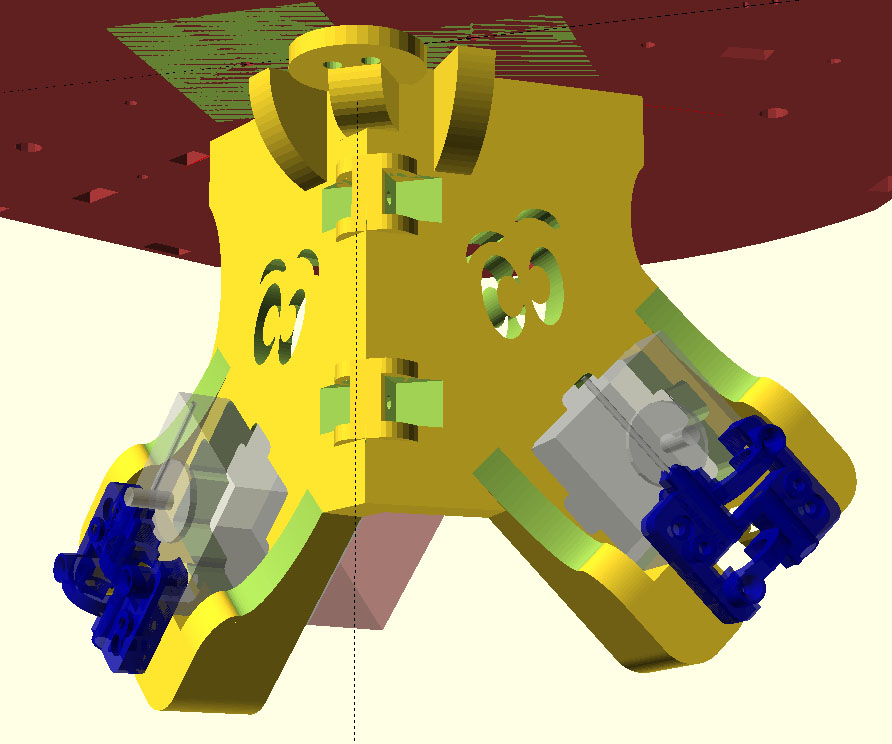 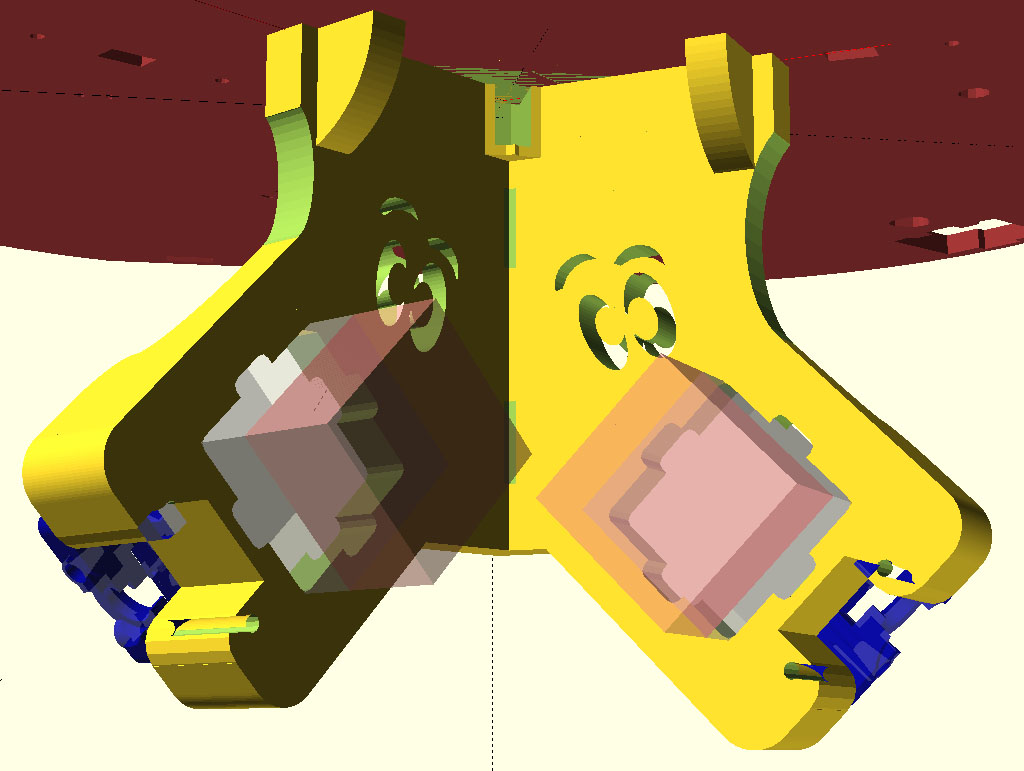 These turned out great! I’m really happy with how they went together and mounted to the top plate. They’re also significantly simpler than the “box” style extruder holders, more like the stock extruder holder that comes with the stock design. The V shape is very stable and the lateral braces on top really aren’t necessary, except to hold the 6-32 nuts. 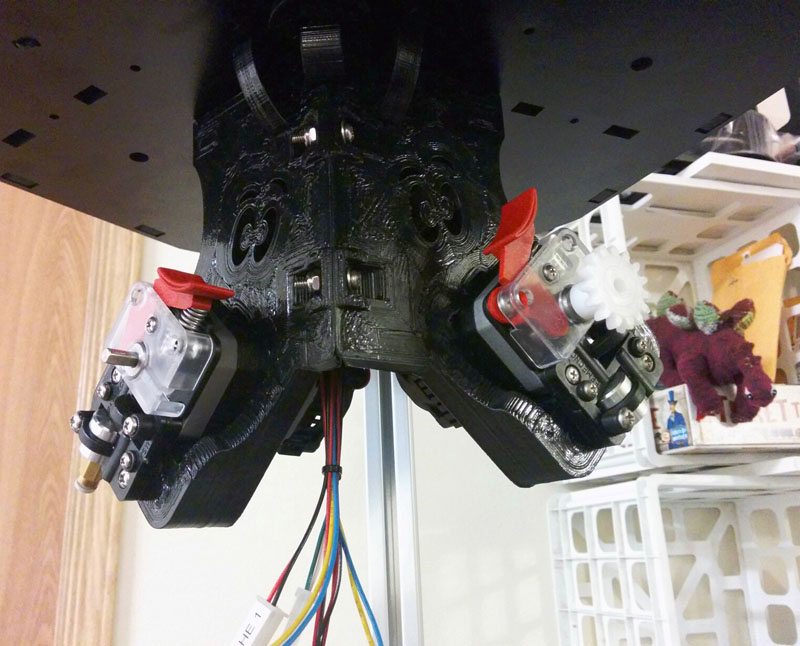 The biggest downside of this approach is that the stepper motors will be located inside any heated enclosure. If a heated enclosure is added, either the motors might need better cooling, (water?) or else moved to a location outside the enclosure.

All the wiring is still free hanging. A quick connect panel located near the top plate where the wires come out of the wire guide would be a nice addition.

The goal here was to try to mount two E3D V6’s with their heatsinks above the effector platform and nozzles below, like the stock design. If the platform tilts with travel, this would reduce horizontal displacement, even if it wouldn’t help with vertical alignment of the nozzles.

Here’s how the design looks: 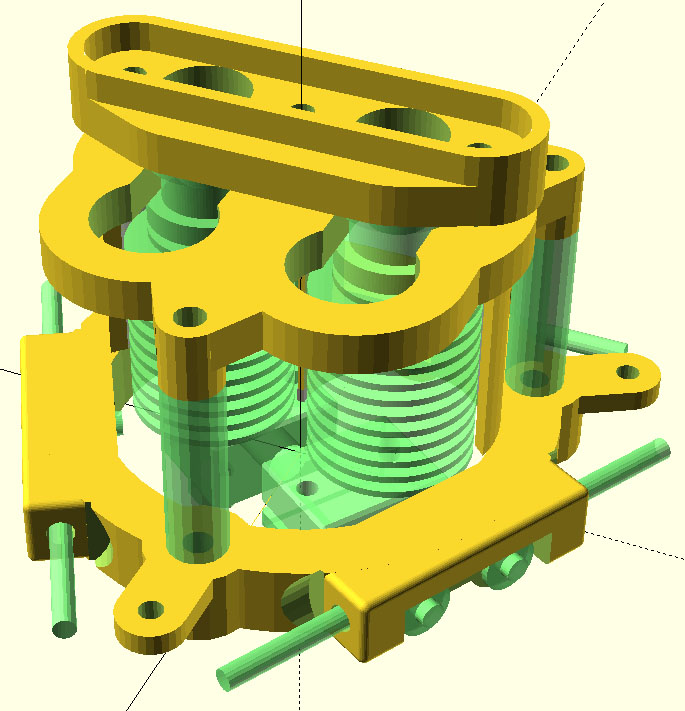 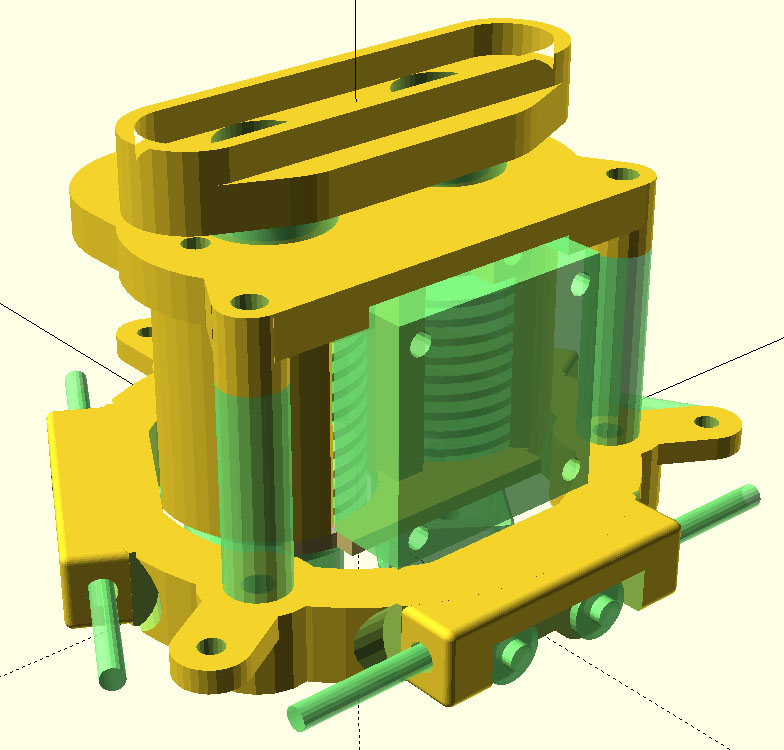 The groove mount for the two hotends is pretty standard, except for a little additional material on top of the clamp to keep it from bending as much. Only one fan fits without interfering with the lash straps on the delta arms. A shroud that shares air from the fan is integrated into the tool holder.

These STL files are also on Thingiverse and the full source code and supporting files are on github. 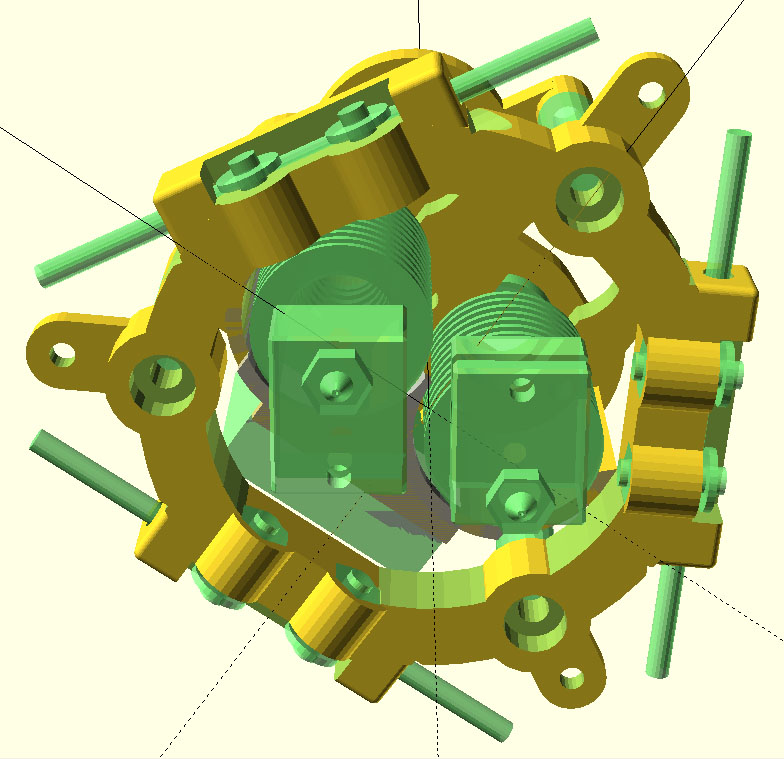 The hole in the stock effector platform is much too small for that goal, so this design includes a wider printed effector platform. This was a pretty scary thing to attempt, since the effector is a precision injection-molded part and its dimensions are crucial to the printer working effectively.

This design uses screws to hold the arm mounting rods in place, and has a much larger interior space to leave more clearance for the print heads. The most far-reaching change to permit this was to move the vertical standoffs farther out.

Unfortunately, while it is possible to assemble this tool plaform as intended, getting the wires is a very tight fit and the force from the wires tends to twist the heater blocks, loosening the heat break and creating potential failures. 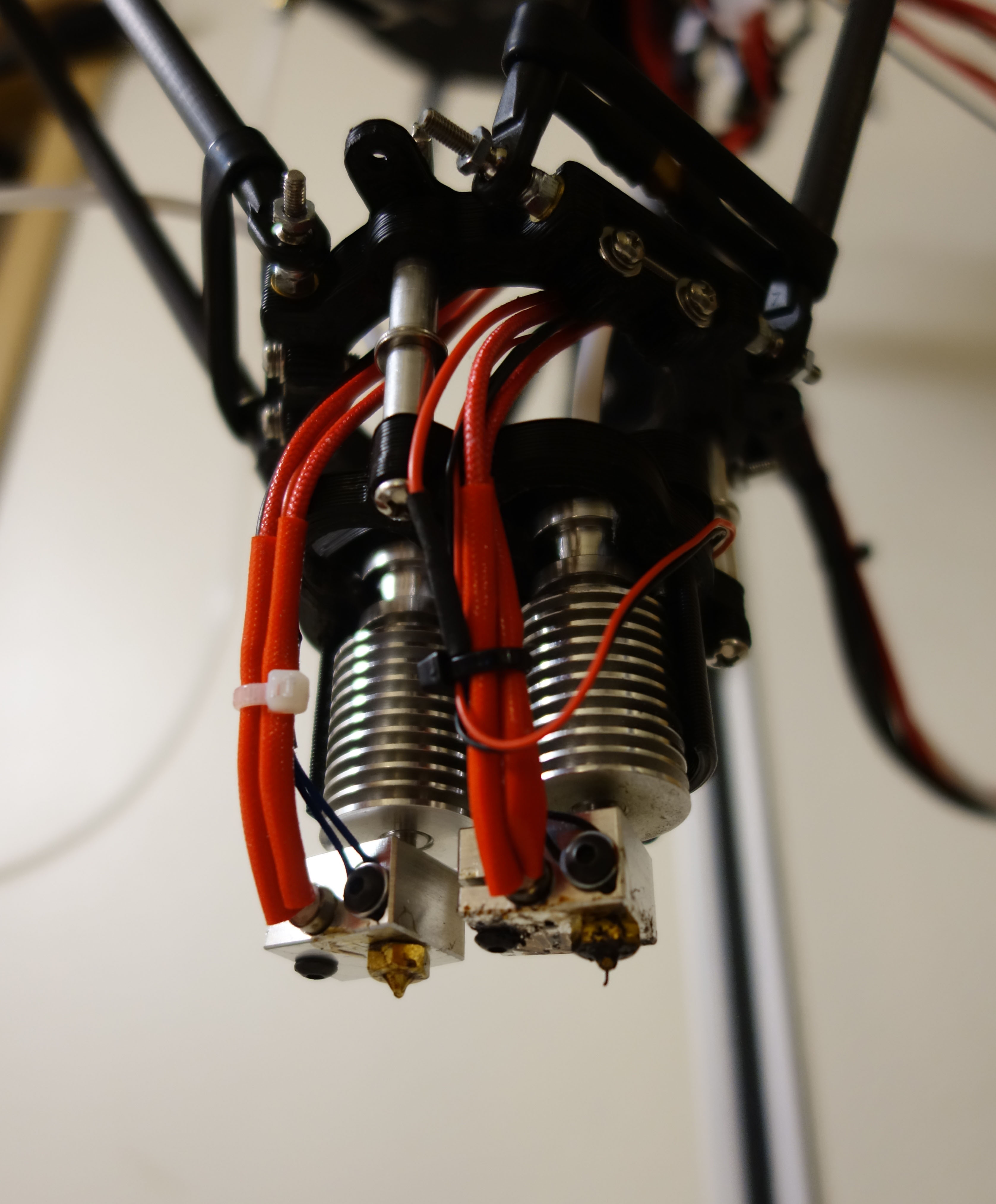 On the plus side, the entire assembly works just as well as a more-typical undermount arrangement, by just assembling it upside down! 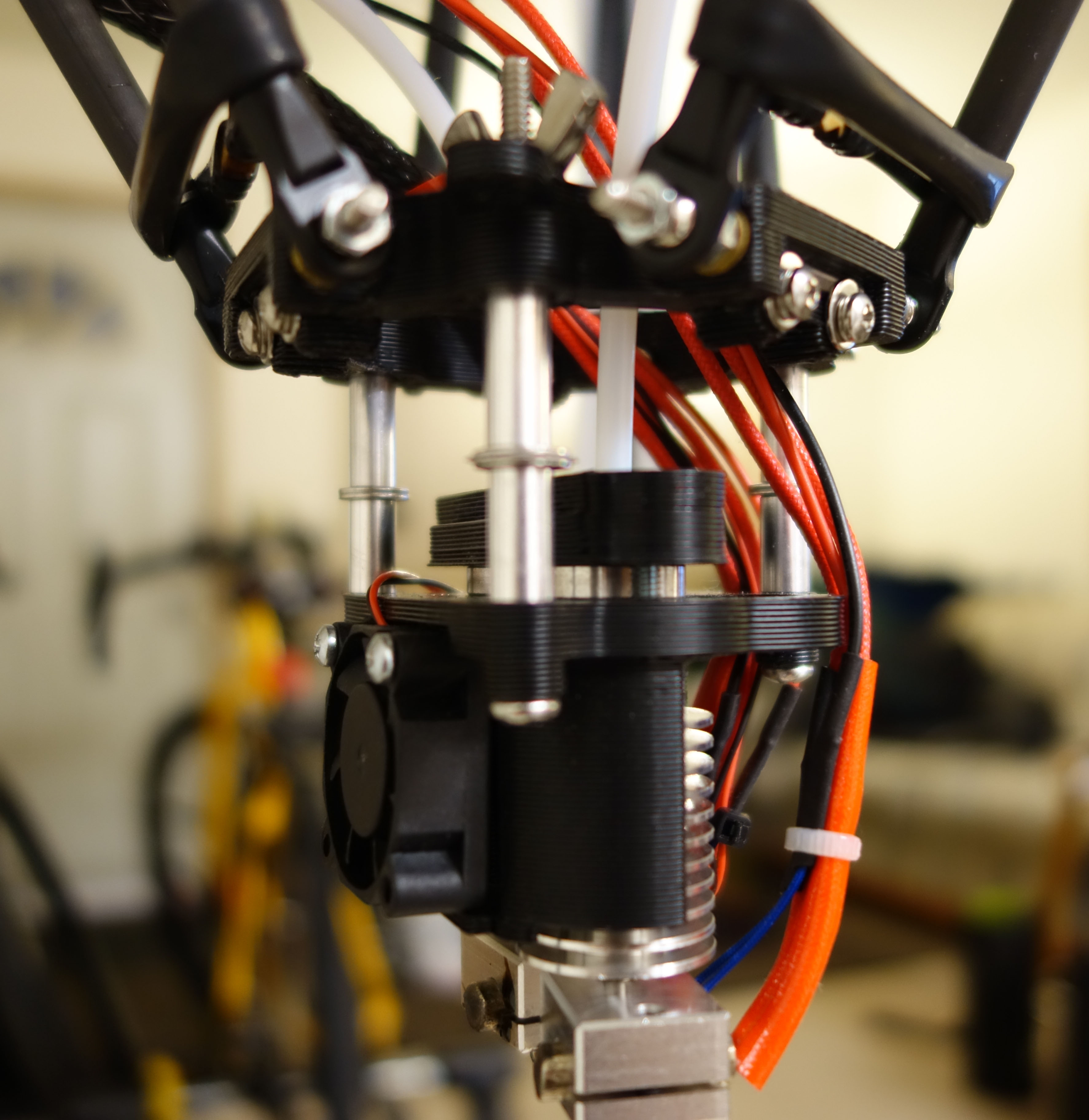 The consensus from everyone who’s previously done dual extrusion modifications is that the print head nozzles must be perfectly level for it to work. My solution to this was to cut thin pieces of paper into round washer shapes, then sandwich them between metal washers, then tightly compress the paper by tightening the screws. This arrangement made it pretty easy to get the sub-0.01mm height adjustments to get the nozzles nice and level.

This was a solid effort and came close, but I think putting two E3D V6’s above and poking down though the effector platform is a bit too ambitious without expanding the platform even further. This would change the printer geometry, which can be handled in firmware, but is probably too much deviation from stock to justify the approach.

An undermount dual extruder holder would work just fine with the stock effector platform, so I’ll probably switch back and print a new dual tool holder with the standard upright screw spacing.

The big positive surprise was how well the printer works with a printed effector platform! After about 50 hours of printing with it using a single hot end, the quality of the finished prints seems to be just as good as with the stock platform. I think that speaks to the quality of the stock Rostock Max V2; it can print replacement parts for itself that function as well as the stock injection molded pieces!

Several other tasks are required to get things running:

The new firmware configuration files for Repetier 0.92.4 are on github. This is one of the biggest stumbling blocks for a lot of dual extrusion modification attempts.

SeeMeCNC has a nice logo, which is remixed here for the logo that appears on the printed extruder holders: 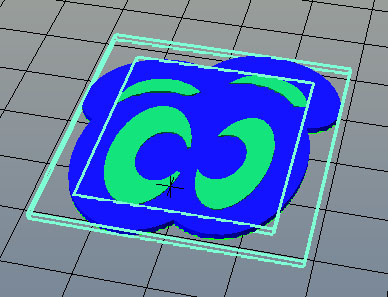 Here they are, printed while testing a wipe tower and shield generated by MatterSlice. Yellow and black ABS. 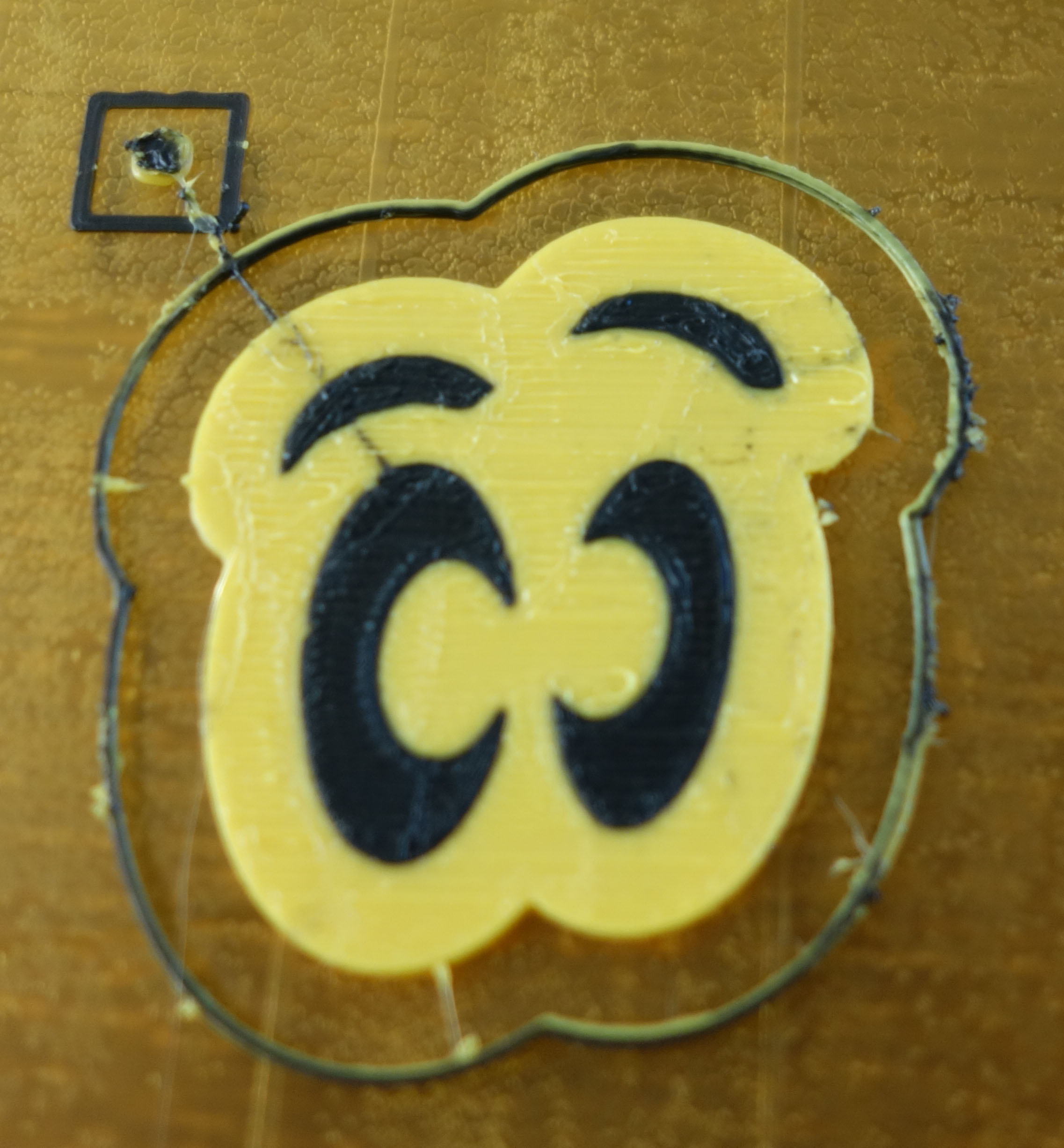 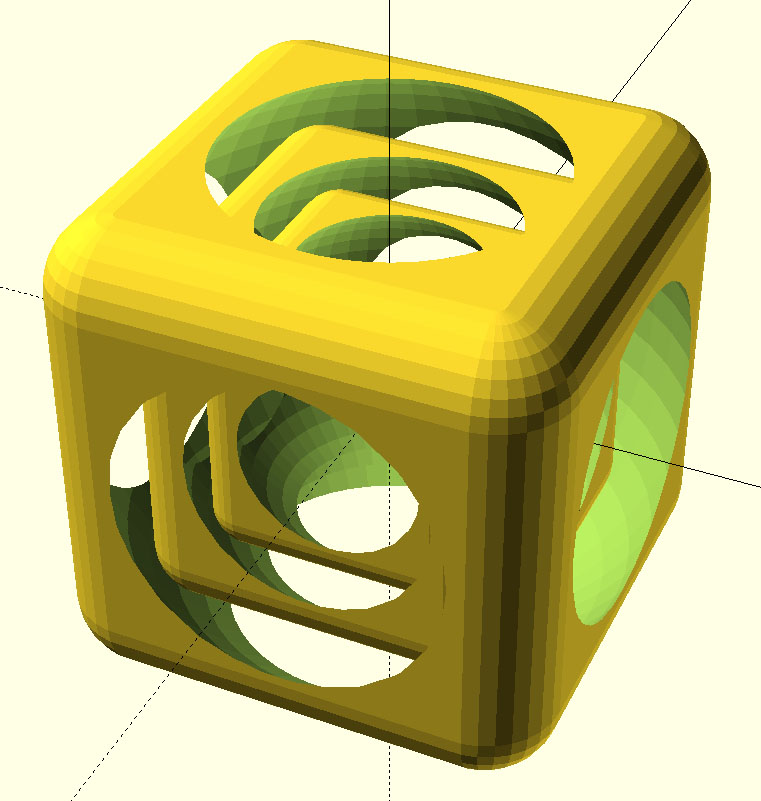 I designed one of those cube-in-cube-in-cube things that people make to show off their lathe skills. I have neither a lathe nor said skills, but I have a dual-extrusion 3d printer!

Here’s some pictures of the print in progress. There’s definitely artifacts from the lack of a good wipe shield. Neither Slic3r or Matterslice do a great job generating them, but it’s easy to imagine how you could do it. Yellow ABS and white HIPS are used. 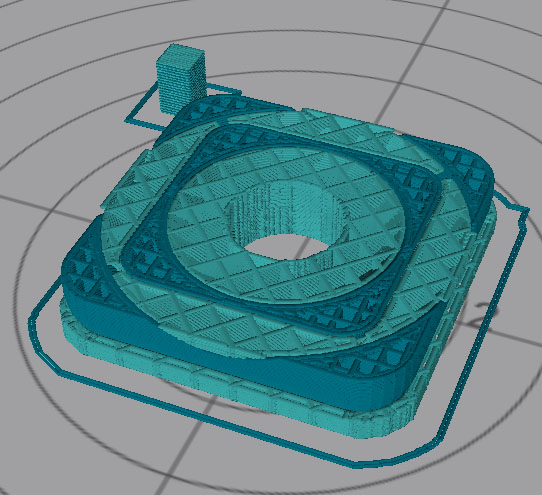 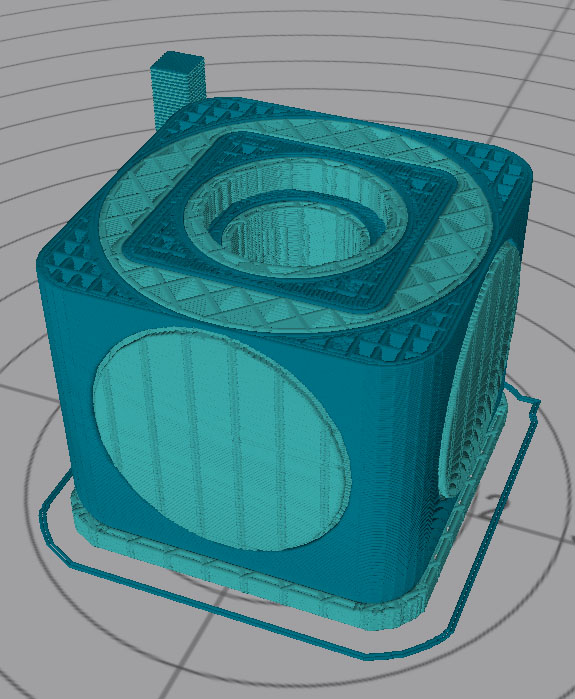 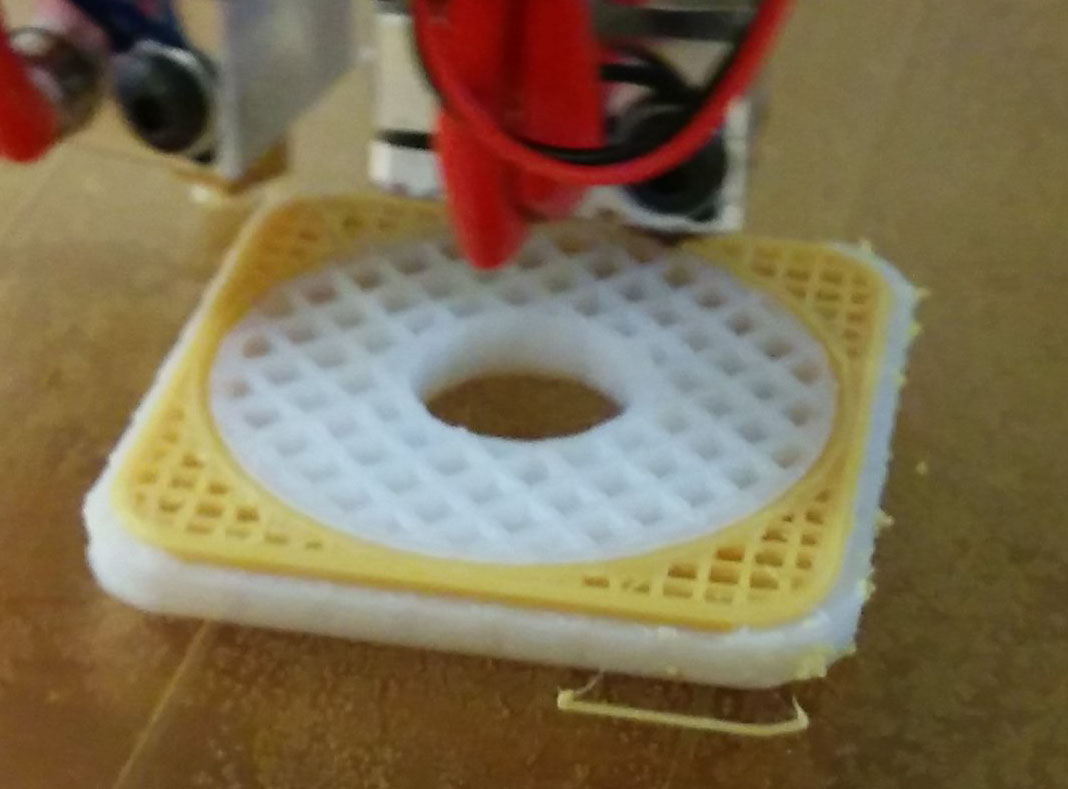 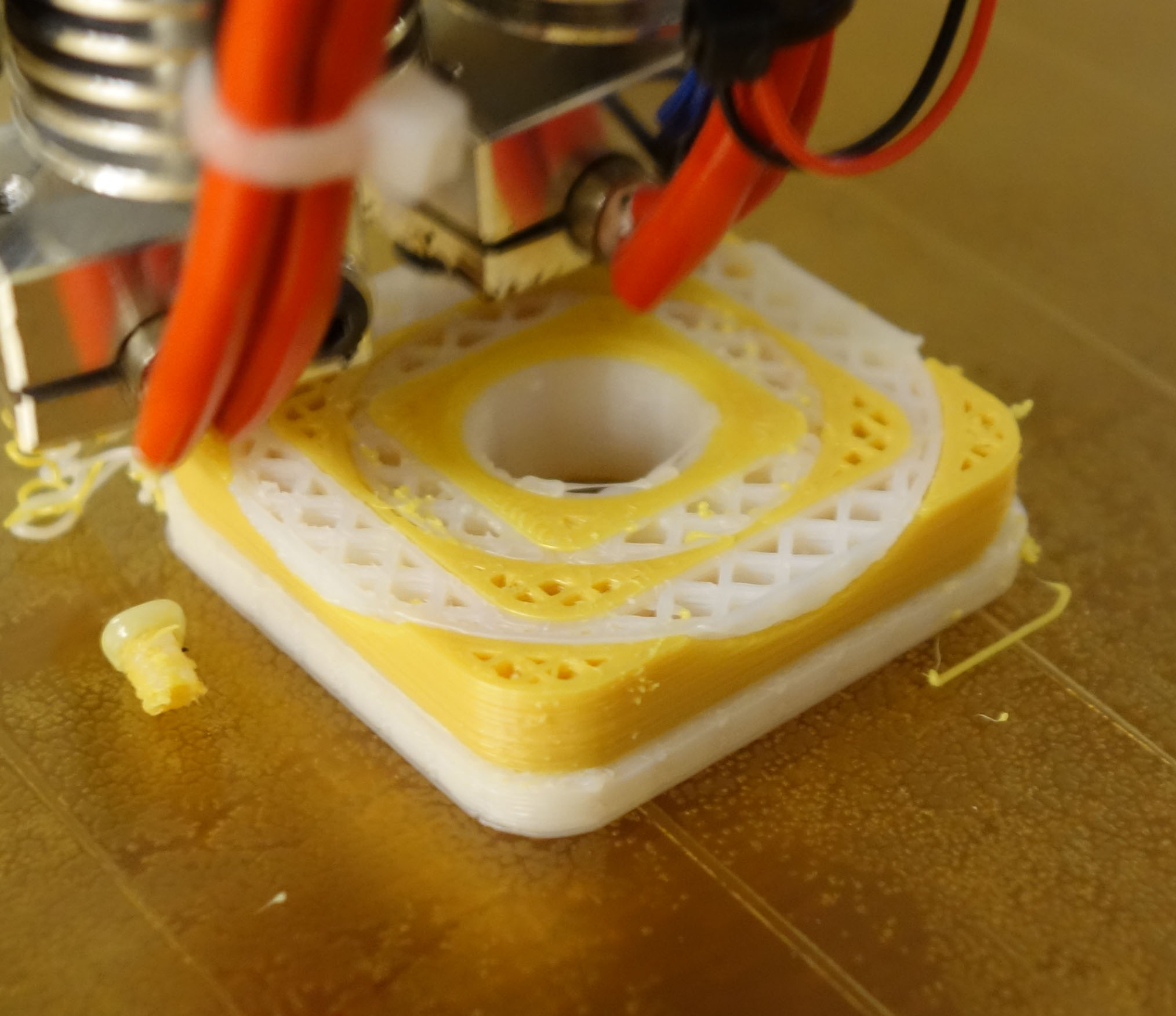 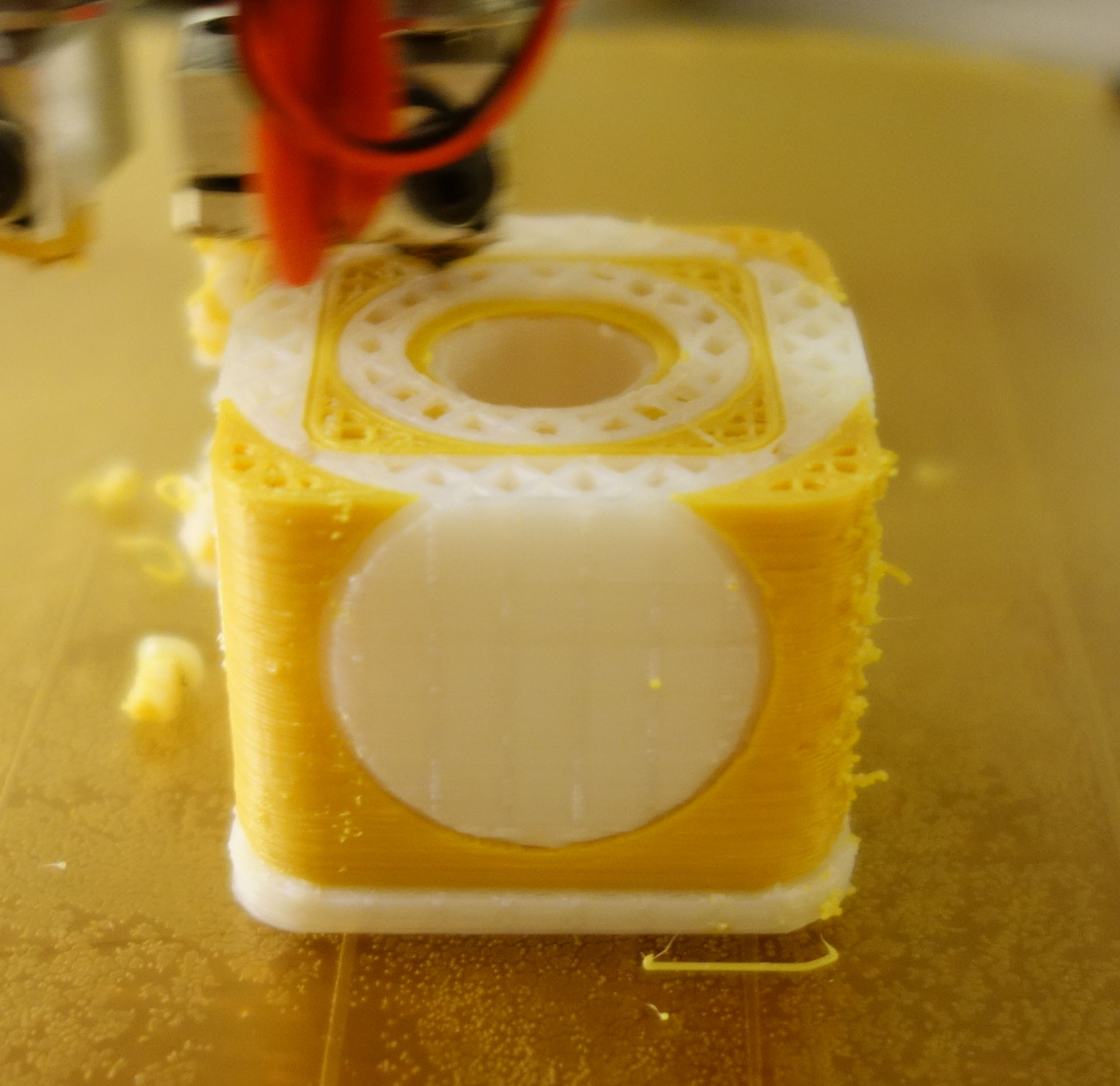 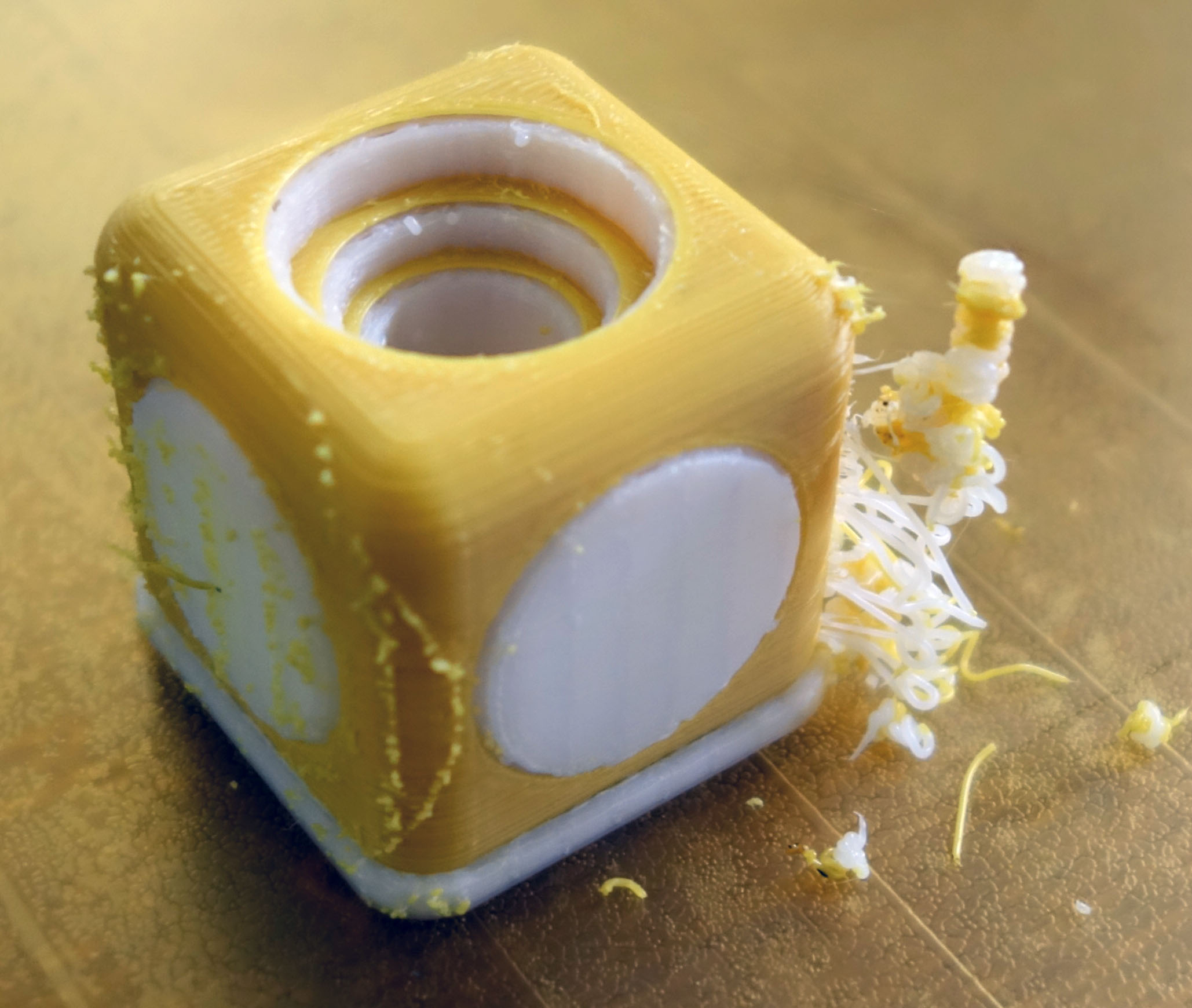 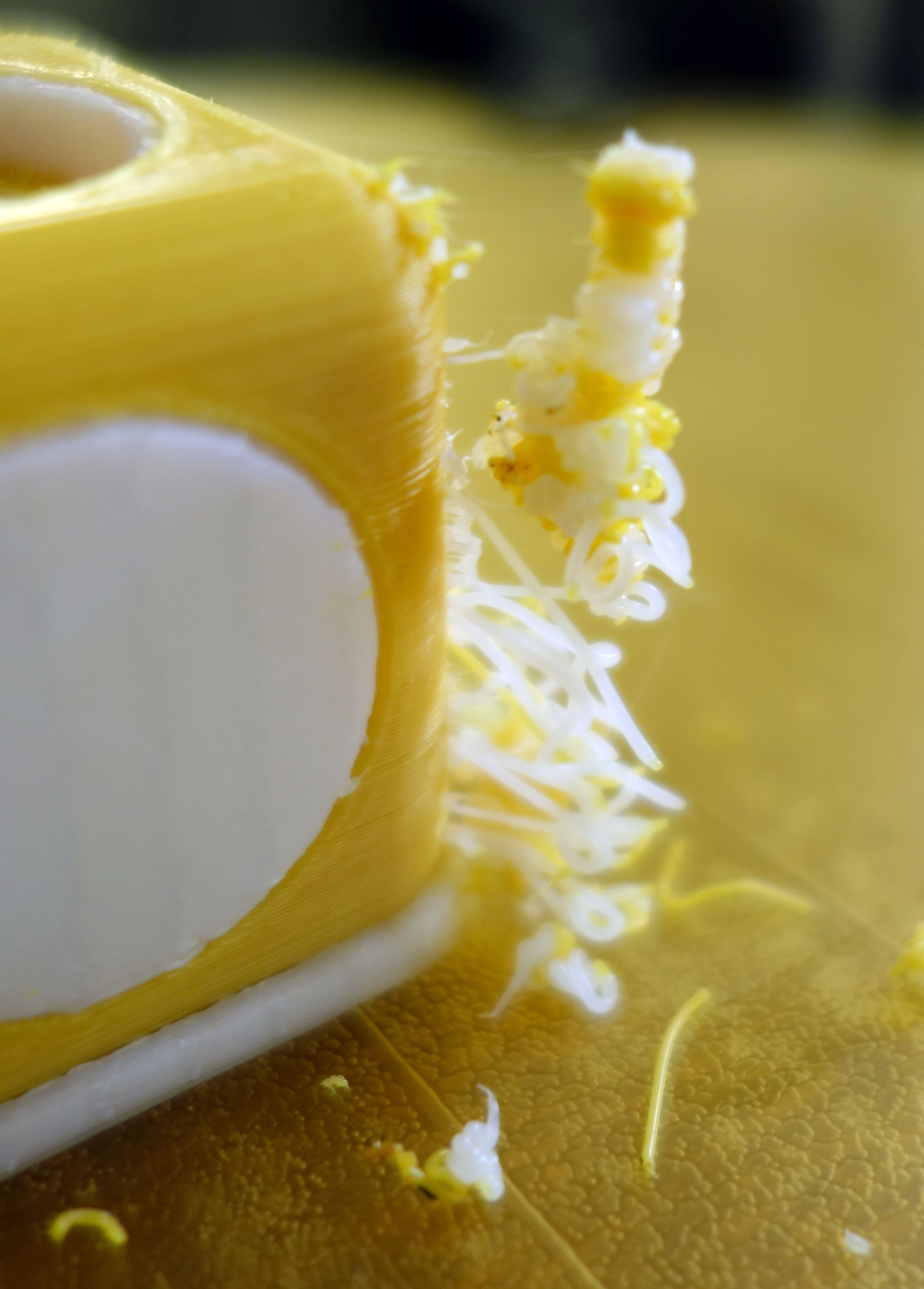 The support material is HIPS, which should be soluble in limonene. Unfortunately, it’s very difficult to get limonene shipped to interior Alaska, but I found some concentrated limonene cleaner that was covered in enough dire warnings that it might be strong enough. 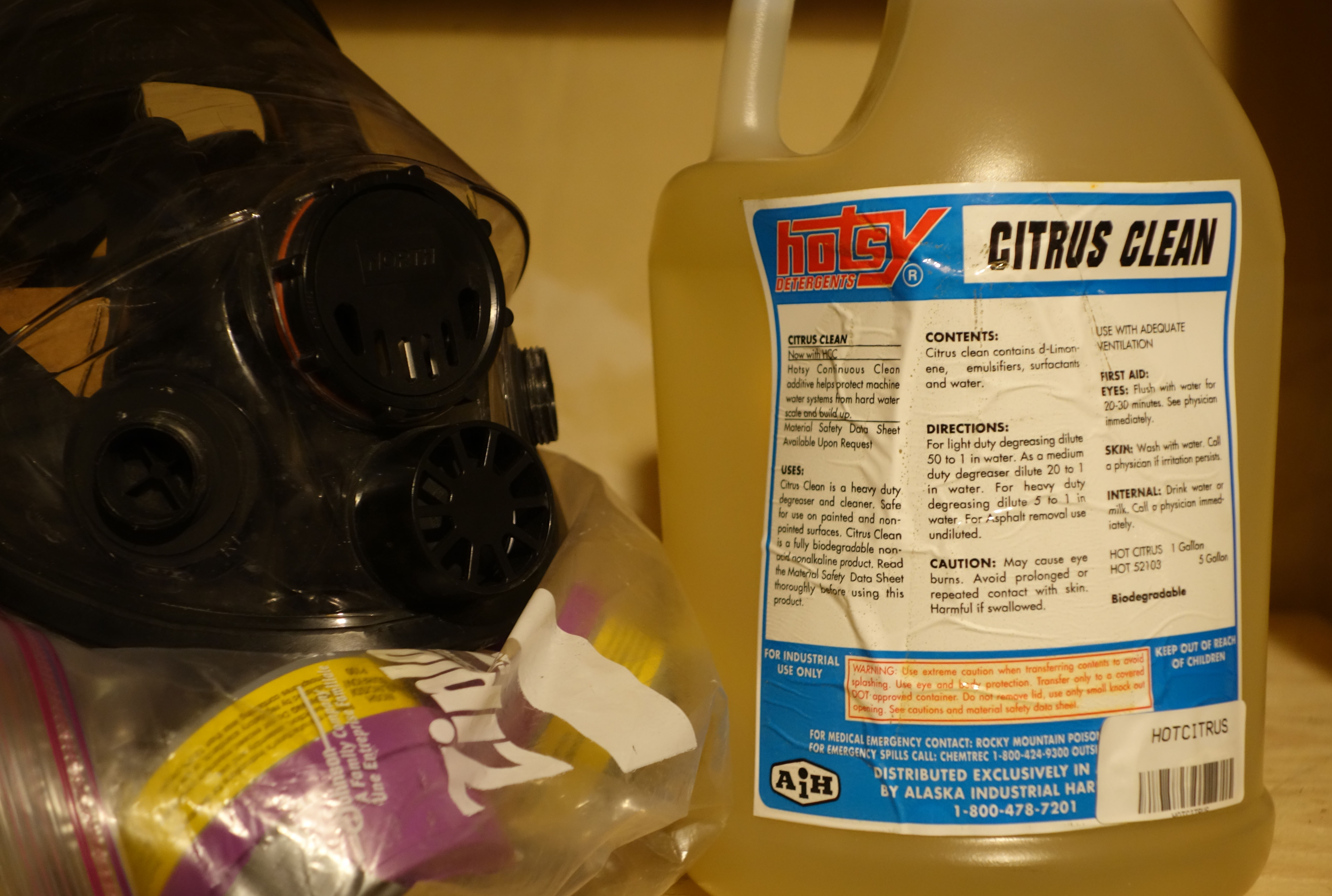 Into the limonene it goes! 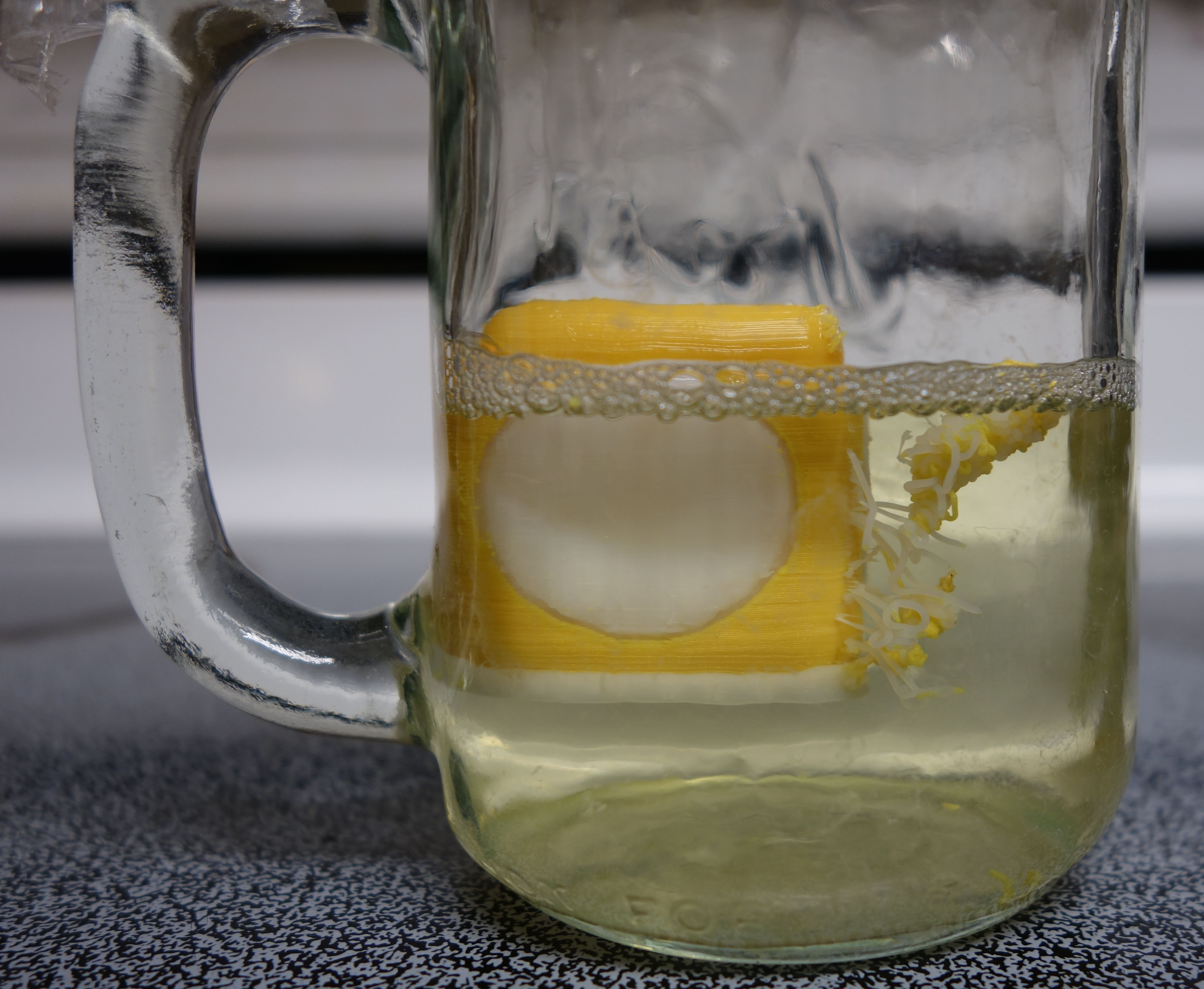 Sadly, the cleaner did not dissolve the HIPS at all, even after 2 weeks in the jar. Maybe the emulsifiers or other additives ruin it. I’ll have to work on somehow getting access to pure limonene to try again. I tried removing the support material with hand tools, but it was a losing fight that eventually damaged the print. 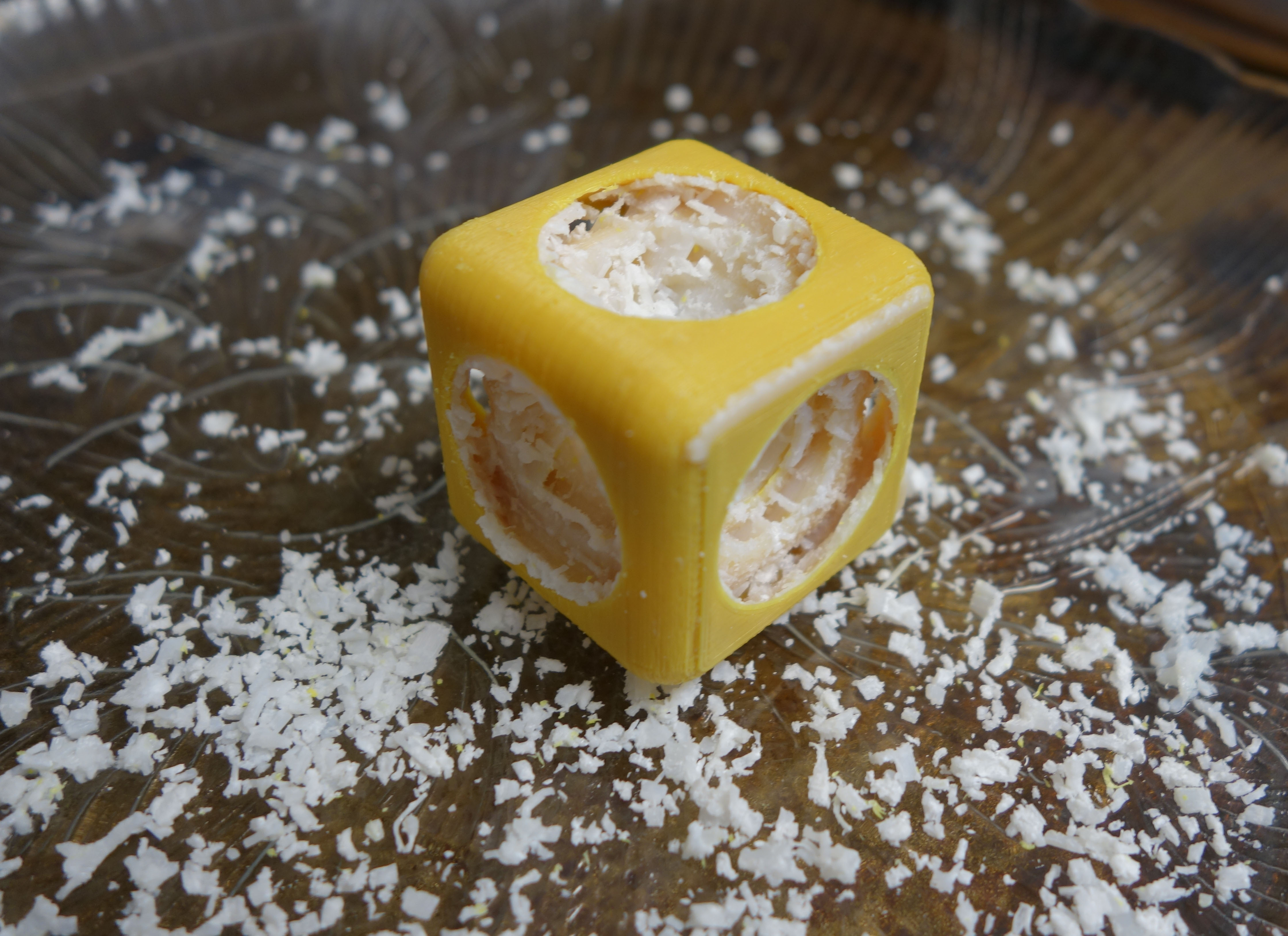 Let’s try splitting the Dr. Lawlor head that’s ubiquitous around the CS department into creepy-looking clear and opaque portions and see if we can print light pipes such as you might find in an instrumentation panel. 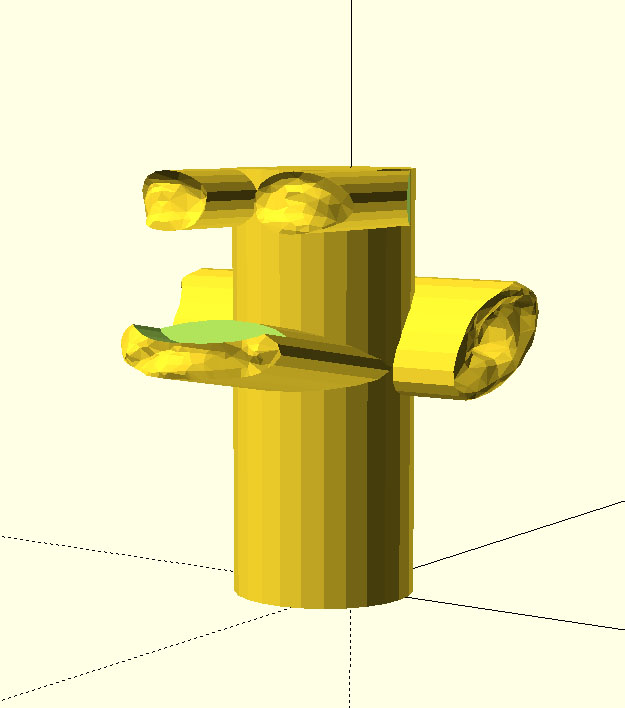 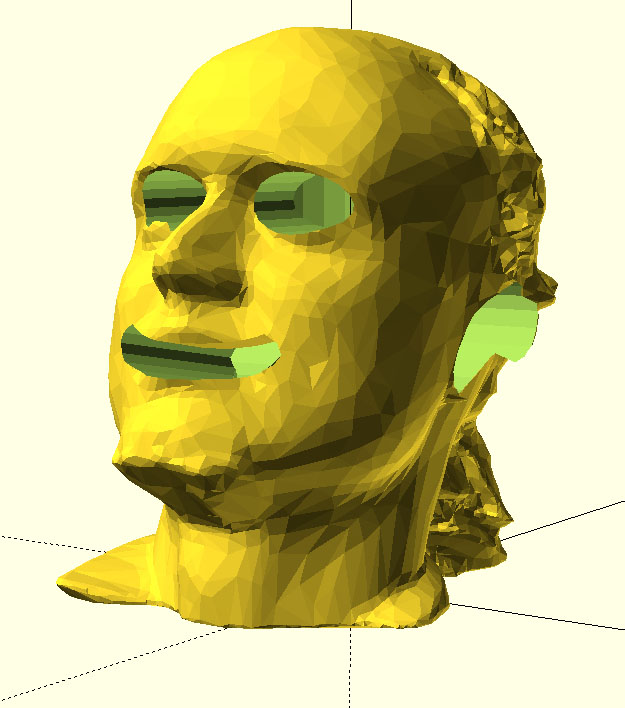 Okay, okay, it was late at night when I did that one.

Again, the mechanical performance of the printer was great! If I’d set up some nice manual wipe towers and figured out the MatterControl bug where it’s printing exterior permiters first, the print artifacts would have been nearly none! Black ABS with clear PET+. 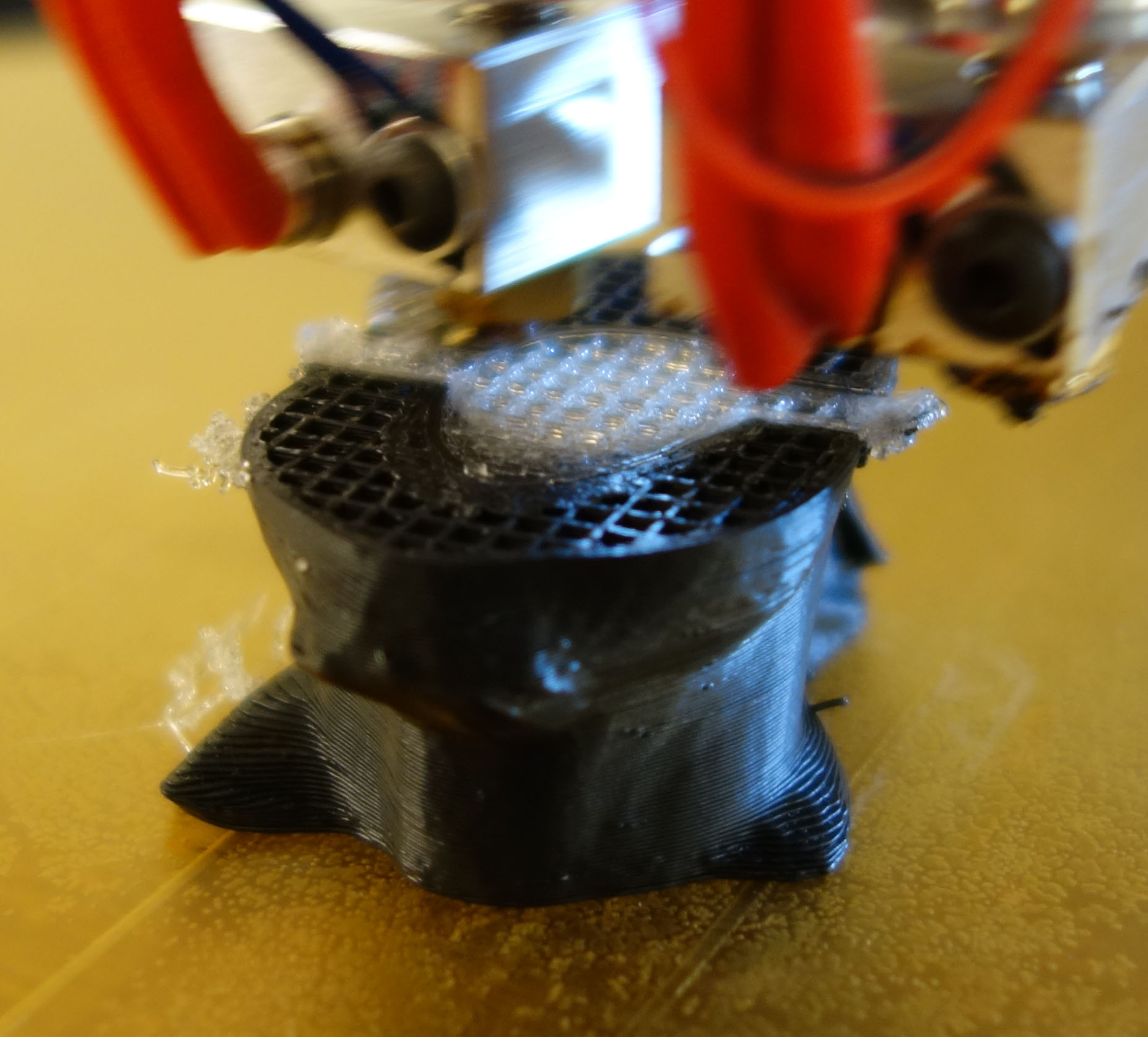 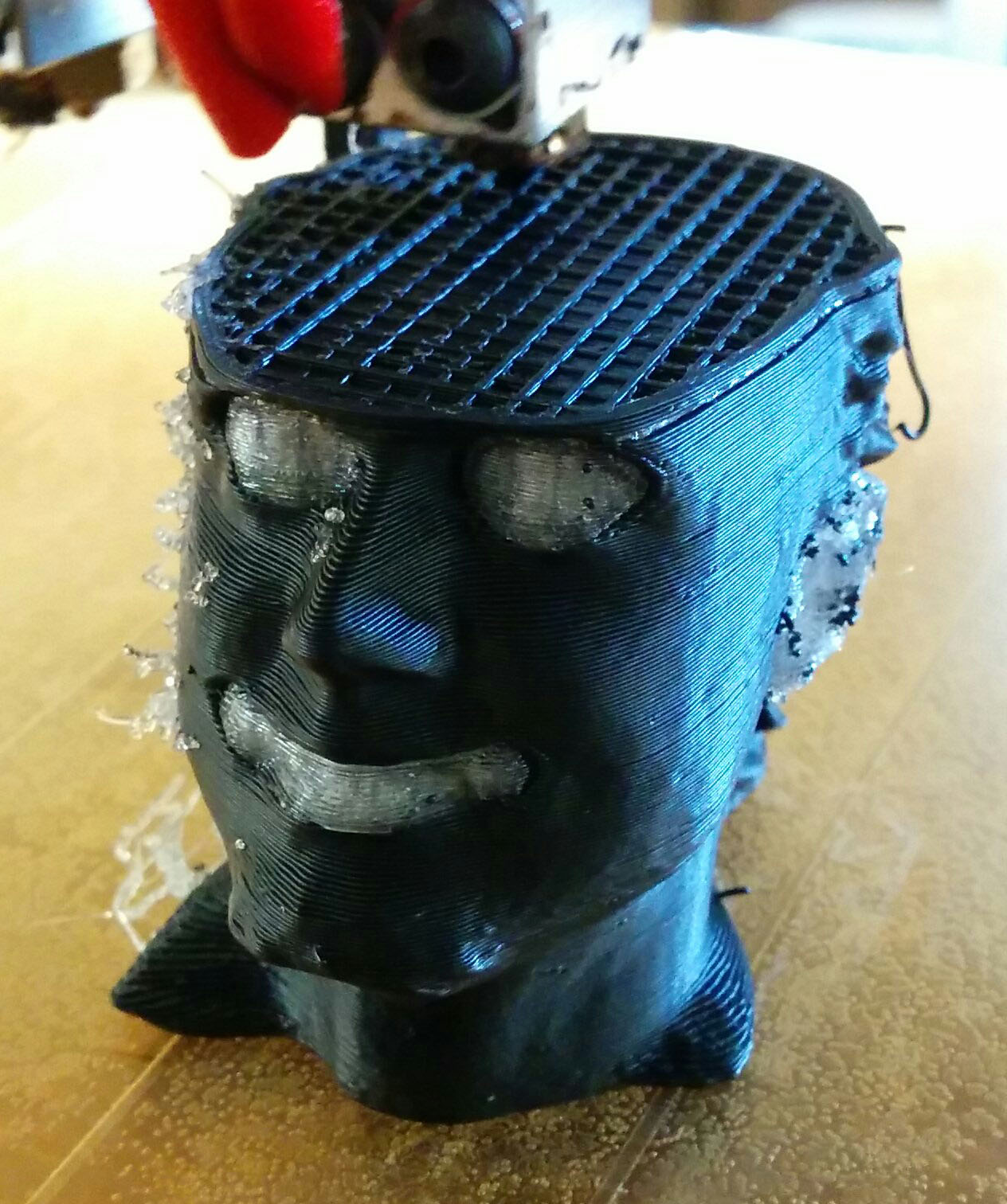 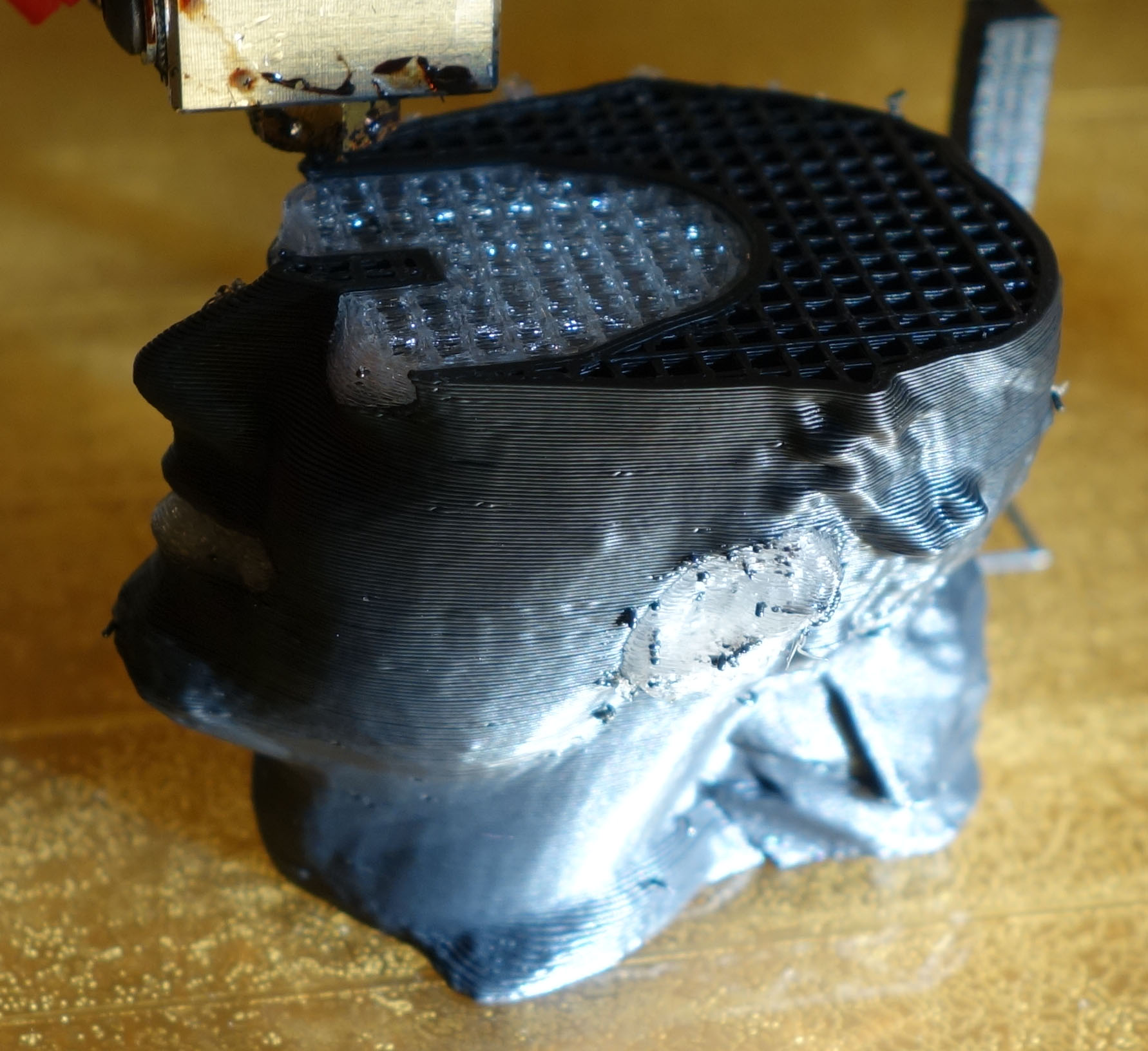 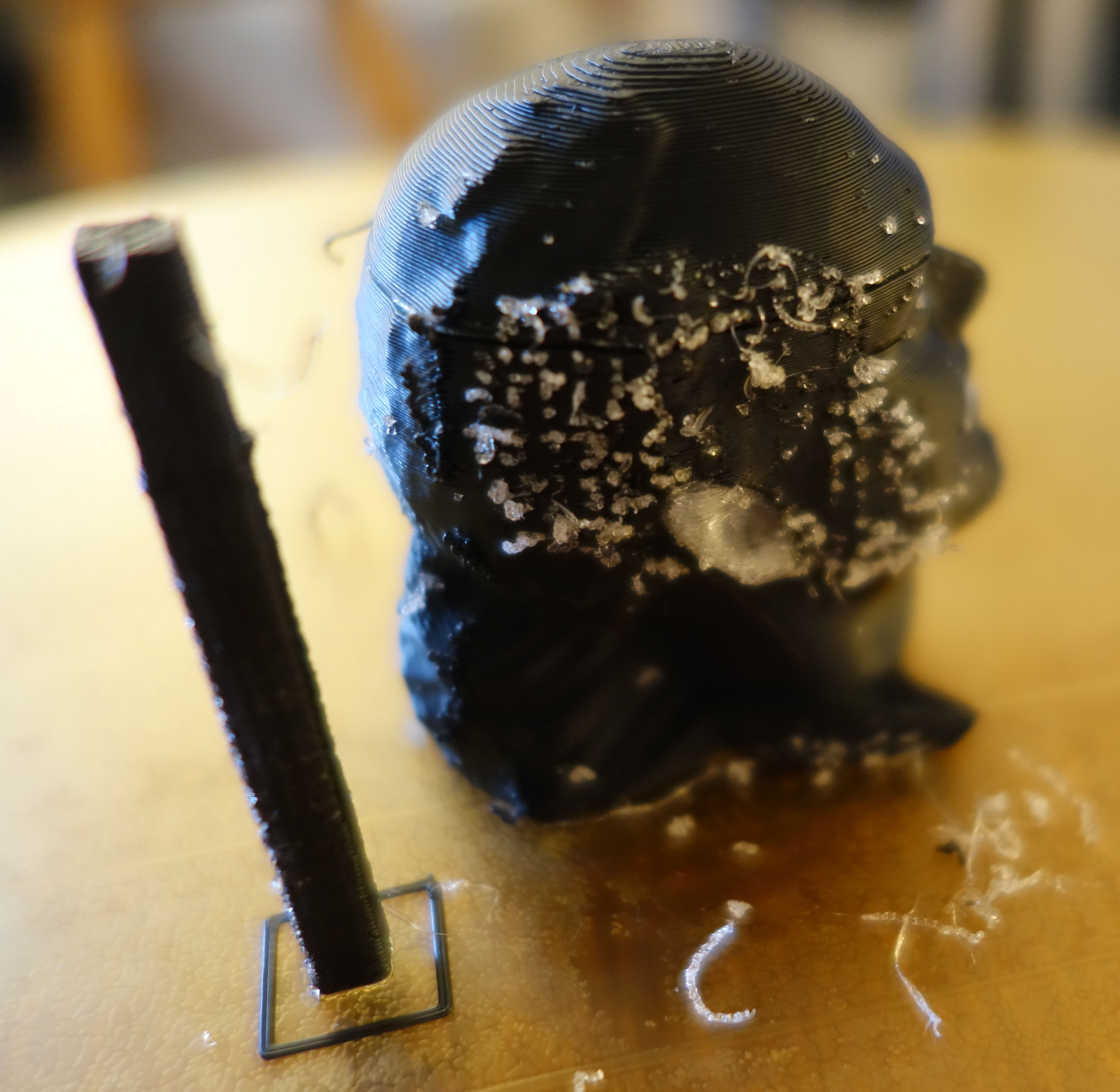 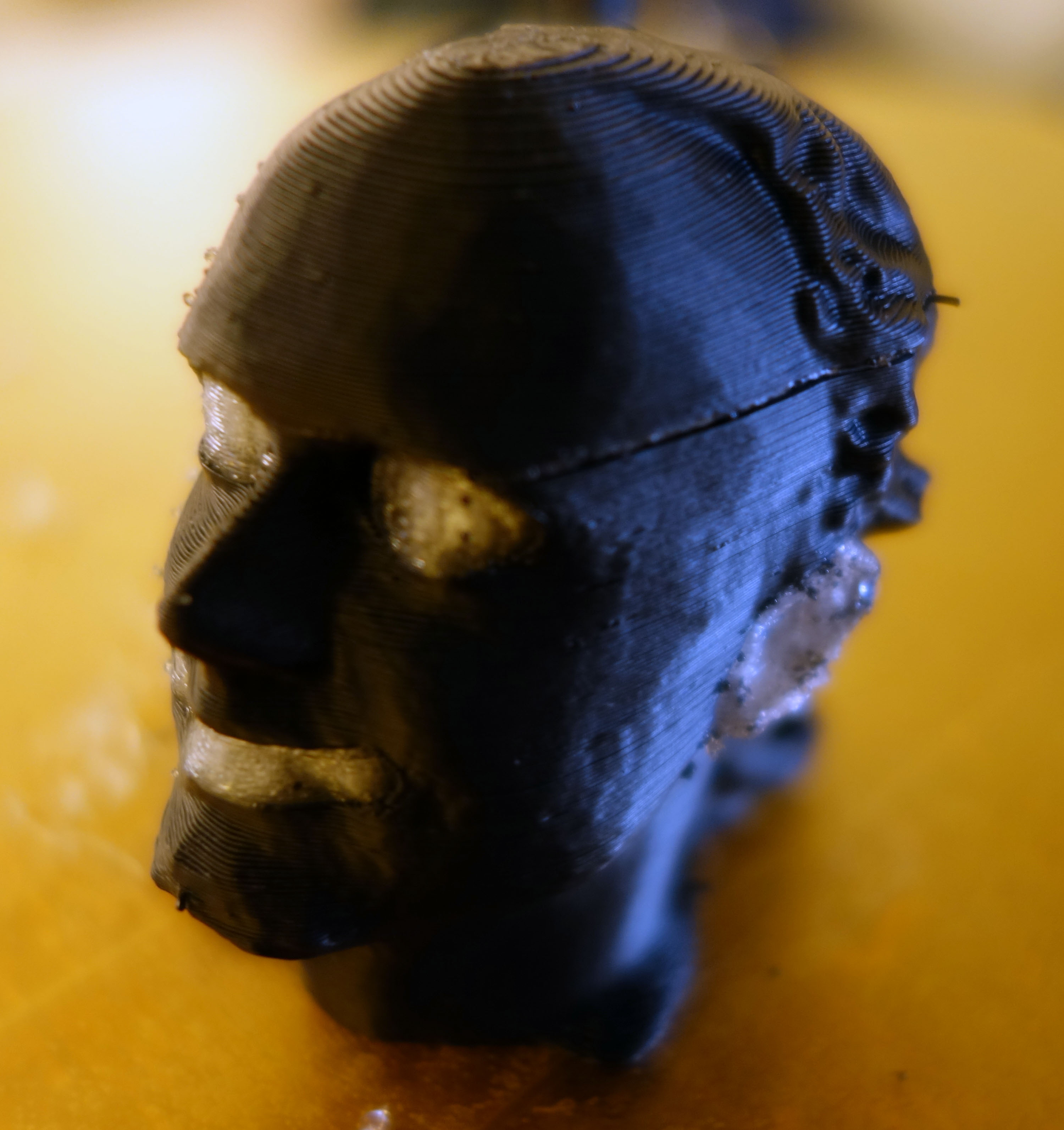 The light transmission/diffusion of the PET+ isn’t great, possibly because I wasn’t able to strongly control how infill is generated for each material. The end result is more cheap Halloween ornament than professional indicator light, but it was still a great successful test of the new dual extruder setup! 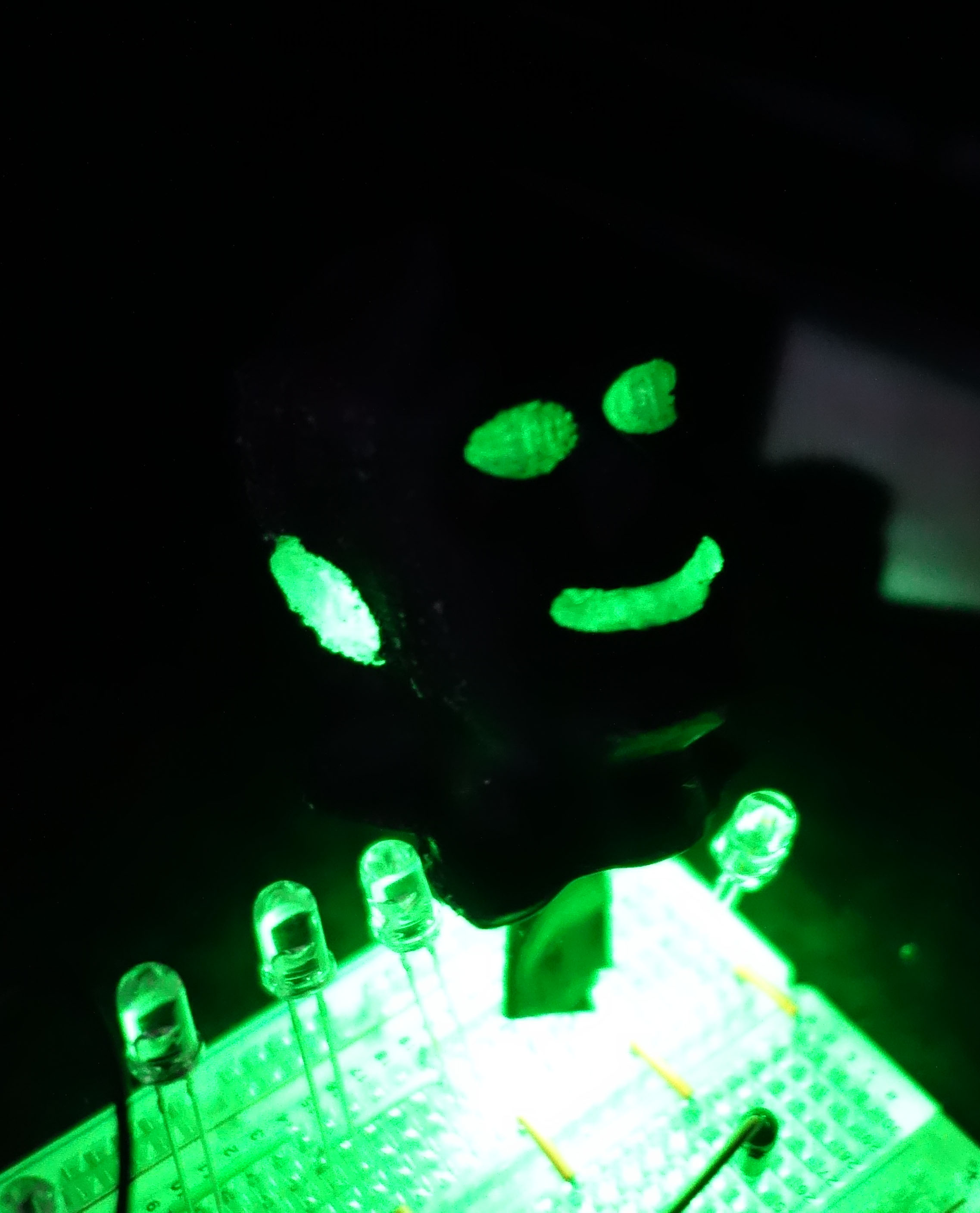